Inside the Writer's Studio with Monika Schröder 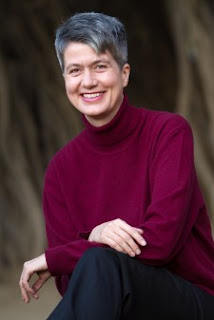 Today for Inside the Writer’s Studio we have with us Monika Schroder, author of The Dog in the Wood, Saraswati’s Way, and the newly released My Brother’s Shadow. I was introduced to Monika by the irrepressible Kirsten Cappy, the brain behind Curious City. Shortly thereafter, Monika was working on a piece for Hunger Mountain about the writing of My Brother’s Shadow. It is an honor to have her with us today to dig into her process and her keen insights into human nature.
Welcome,  Monika. And let us all welcome My Brother’s Shadow to the shelves.
A bit about the book:


From the publisher, FSG


As World War I draws to a close in 1918, German citizens are starving and suffering under a repressive regime. Sixteen-year-old Moritz is torn. His father died in the war and his older brother still risks his life in the trenches, but his mother does not support the patriotic cause and attends subversive socialist meetings. While his mother participates in the revolution to sweep away the monarchy, Moritz falls in love with a Jewish girl who also is a socialist. When Moritz’s brother returns home a bitter, maimed war veteran, ready to blame Germany’s defeat on everything but the old order, Moritz must choose between his allegiance to his dangerously radicalized brother and those who usher in the new democracy.


And though out only one day, the reviews are in and they are outstanding!


“A good choice for sharing across the curriculum, this is a novel readers will want to discuss.” --Booklist 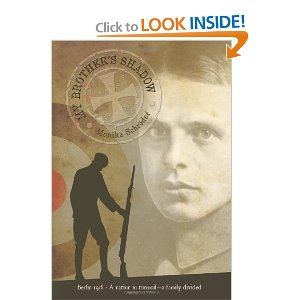 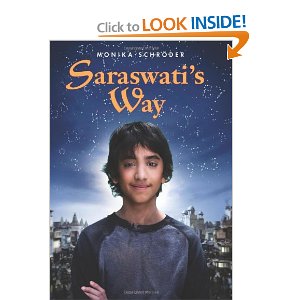 I seem to develop the external plot structure first. For THE DOG IN THE WOOD I had to slowly create a character that this story could happen to. Akash, the main character of SARASWATI’S WAY, was fleshed out in my mind early on and I knew that his internal journey would be connected to his relationship to his gods and how he defines fate. I knew the story’s arc would take him from his village to the train station in New Delhi, but I didn’t learn about the obstacles along his way until I wrote the book.
When I started to write MY BROTHER’S SHADOW I knew it would be a story about disillusionment, about how the main character, Moritz, deals with the loss of what once was and adjusts to a completely new world. I knew that Moritz’s brother would return from the war and join the reactionary forces in Germany, opposing his mother’s involvement with the socialist movement. But the details of his journey and the emotional development that he went through I had to discover through the process.
Which literary character, yours or another author’s, do you most relate to? And why?

In my own work I can relate to Akash. He is a math wizard (I used to be very good in math), he has a burning desire to fulfill his dream and the stamina to pursue it, but he has to learn patience (I still haven’t learned to be patient).
Inspired by the Actors Studio, what sound do you love? What sound do you hate?
I love silence. When my husband and I spend the summers at our cabin in Northern
Michigan I enjoy the absolute silence at night. Having lived in big, noisy cities for the last 15 years probably has made me crave silence even more. We have now left New Delhi, a noisy city of over 17 million, and moved to the mountains of North Carolina, where it is more silent.
But if you ask me about my least favorite ones I might name a few: I don’t like the sound of chain saws or loud machines but I also have some quirky dislikes: I don’t like hearing someone clipping his nails or cracking his knuckles or the sound of people jingling coins in their pockets. (I know this is weird.)
Be brave. Share a paragraph from a WIP.
As I passed the reverend’s room I noticed that the door stood ajar. I peeked inside and found his chamber empty. I gave the door a light push and it opened without the familiar squeak. The reverend must have fixed it himself as I noticed a dark oil stain around the hinges. I entered the room where the bag stood on the bed. Next to it a large map was spread out on the cover.  I recognized the almost triangular outline of India, as I had read about the country in Uncle Ezra’s magazine. On the left bottom of the map was written: “A New Map of Hindoostan by Major James Rennell, Surveyor General to the Honorable East India Company.” I stepped next to the bed to study the tiny names of cities and rivers. A circle was drawn in red pencil around a city in the northern part of the country. Leaning closer I tried to decipher the name. Dehly. I wondered if this was the location of the reverend’s brother’s mission.  Looking at the bag I contemplated a quick search for the heavy object that caused the clanging sound earlier but I didn’t dare to touch it. When I heard footsteps on the stairs I quickly hurried from the room. I had just reached the hallway when the reverend appeared on the landing, wearing his coat and hat. “You are still awake, Caleb?” he asked, eyeing me suspiciously.
“I’m just about to go to bed,” I said, glad the loud banging of my heart was inaudible to him, and that I could slip into my room without another word.
In ode to Maebelle, the main character in my new book Truth with a Capital T, who keeps a book of little known facts about just about everything, please share a wacky piece of trivia that has stuck with you or please share a little known fact about YOU.

Email ThisBlogThis!Share to TwitterShare to FacebookShare to Pinterest
Labels: Booklist, Inside the Writer's Studio, Monika Schroder, My Brother's Shadow, Russell Freedman, Saraswati's Way, The Dog in the Wood