Inside the Writer's Studio with Laurie Calkhoven

Today at Inside the Writer’s Studio we have with us, my good friend and old NYC critique partner Laurie Calkhoven. She is with us to talk about her new novel Will at the Battle of Gettysburg, 1863 which is the second installment in the Boys at War series published by Dutton and authored by Laurie Calkhoven. (Look for the paperback edition of the first in the series: Daniel at the Siege of Boston, 1776 in March!)
I am thrilled to host Laurie as part of this in-depth interview series. Laurie is whip-smart, hilariously and bitingly funny, and is a true craftsperson. She plumbs deep into the time periods she writes about, never failing to give the reader a fascination journey and one that is historically accurate. 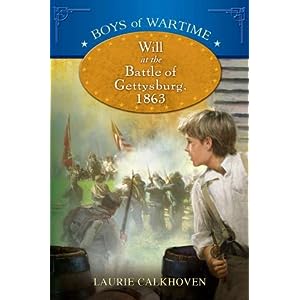 A bit more aboutWill at the Battle of Gettysburg, 1863  from the publisher:
Twelve-year-old Will wants to be a drummer in the Union army, but he’s stuck far from the fighting in his sleepy hometown of Gettysburg, Pennsylvania. Then the Union and Confederate armies converge on Gettysburg, and suddenly Will and his family are caught up in the battle.

From delivering important messages and helping the wounded to even saving a young soldier's life, Will takes readers on a firsthand trip through one of the Civil War's most significant battles.
And rave reviews on Daniel at the Siege of Boston, 1776
From Booklist:
“Set in 1776, this historical novel weaves actual people, places, and events of the Siege of Boston into an engaging fictional narrative.” 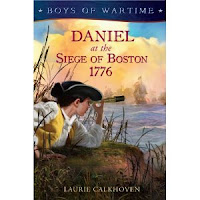 From Kirkus:
"Young readers will learn much about the period...a fine introduction to the times for an audience not yet ready for Johnny Tremain."
Welcome, Laurie. Thanks for being here.
Is there a story behind the story that you wish to share? (Ie: the ah-ha or lightning moment where the story inspiration struck)
I didn’t set out to write a series.  I got the idea for Daniel at the Siege of Boston, 1776 while I was researching a biography of George Washington for the Sterling Biography series.  I ran into Mark McVeigh, who was then an editor at Dutton, at an SCBWI conference and he asked me what I was working on. I mentioned my idea, but I hadn’t put anything down on paper yet.  He didn’t seem interested at the time, but he called a couple of weeks later and asked me to put together a proposal for that book and three more—each one set in a different war—in a week!
I didn’t have time to get scared, or to do more than the most casual research.  I came up with four stories and sent off my four-page proposal. I expected it to sit on Mark’s desk for weeks or even months, but he called me a couple of days later and asked for a few changes.  And three days after that, he called again to tell me Dutton wanted to make an offer!  I was stunned, and delighted.  Until then, I had published nonfiction and a lot of media tie-ins under a pen name, but my first two contemporary novels hadn’t sold. Suddenly, I had a four-book contract. I gave myself a few days to celebrate, but then reality set in. I had to research and write four historical novels! So I got to work.
How do you stay inspired to face the dreaded blank page? Is it something you dread? Look forward to? Share a bit about your writing process.
I’m a plotter, not a plunger.  I need to know where I’m going before I start writing, or that blank page would be forever blank. I put together a day-to-day timeline of events in Boston during the siege before I started writing Daniel’s story. For Will at the Battle of Gettysburg, 1863 I created an hour-by-hour chart of what was happening where and when during the three day battle.
I spend as much as six or eight months researching before I’m ready to start writing. Usually an idea for an opening scene will come to me during the research, and that scene shows me who my main character is going to be and what he wants. In the opening scene of Will at the Battle of Gettysburg, 1863, my main character is fantasizing about glory in battle while everyone else around him is getting ready for a rebel invasion. I learned he was a dreamer who thinks war will be a great adventure.  Then, of course, the bullets start to fly and reality sets in.
Once I know who my main character is, I do a lot of playful exercises to learn all about him or her, mostly through character meditations and freewrites.  Then I start plotting.  I use the standard three-act structure with plot points to propel the reader into act two and act three, with a midpoint in act two and a climax and wrap-up scene in act three. Often those plot points change after I start writing, but I need to have a loose structure in place before I begin. Otherwise I flail around.
I knew the opening scene and the climax of the novel I’m working on now, Michael at the Nazi Occupation of France, 1943, before I started writing.  Everything in the middle changed once my fingers hit the keyboard, but the opening scene and the wrap up scene have remained the same.
How important is community in keeping you inspired? What authors are a part of your virtual and/or hometown community? How do they keep you inspired?
I’m in two writing groups, and I don’t think I would have kept plugging away without them—especially in the beginning when the only writing credits I had were rejection letters. 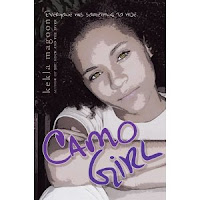 My local critique group includes Kekla Magoon, author of The Rock and the River (Aladdin, 2009) and Camo Girl (Aladdin, 2011) and Josanne LaValley, a Vermont MFA grad.  We meet every Thursday evening and critique each other’s work over cups of tea.  The champagne flows when one of us has something to celebrate. Their support and enthusiasm is incredibly important to me, and I hope I give the same back to them.
I also get together once a year with a group of writer’s I met years ago at a children’s writing workshop. We have weekly e-mail check ins to keep each other up-to-date about our lives and our writing, and once a year we get together for a week-long writing retreat at the beach or in the mountains. Nothing beats that yearly writing marathon punctuated by long talks about writing. It’s an incredibly talented group and I always come away from our retreats with new insights and energy.
What do you feel is your strength as a craftsperson? How do you turn your weaknesses into strengths?
I’ve always been good at creating fast-paced, action-filled plots. Characters are harder for me.  My early rejection letters all talked about good plots and weak characterization.  I spent a lot of time and energy learning to create three-dimensional characters. It’s still more of a challenge to me than coming up with plots. That’s why I try to create characters first and then think about their stories.
How do you balance the internal and external arc in the story? Which comes to you first—the external action or what is emotionally at stake? How do you weave the two together?
External action is easier for me than the character’s inner journey. Ideally the character’s inner journey is revealed through action—through the outer journey.
In Daniel at the Siege of Boston, 1776, Daniel has to learn what true courage is and he does that by learning to act in the face of fear. He has to put everything on the line for the Patriot cause he believes in.  In Will at the Battle of Gettysburg, 1863, Will has to give up his fantasies when real war intrudes on his life and comes away from it with a more mature understanding himself and the world.
Revealing that inner journey and weaving it into the outer journey is still something I struggle with. I hope to get better at it with each novel.
Do you have a favorite craft book? If so, what is it? And what is your favorite take away?
Robert J. Ray’s The Weekend Novelist (the first edition, not the revised edition written with Bret Norris) is the book I used to write my first novel and I still turn to when I’m stuck or in the planning stages of a novel. My copy is being held together with tape and rubber bands.
Ray explains plot points and the three-act structure in a way that clicked for me.  He also breaks down the process of writing a novel into 52 weekend assignments.  Those steps made the big, overwhelming task of writing a novel seem doable, and his plotting exercises always reveal important parts of the story to me.
Describe your main characters favorite meal? And why do they love it?
Unfortunately, writing about boys at war means that food is scarce and starvation is a real threat. A couple of days after the Battle of Gettysburg ended, aid organizations arrived with food for the thousands of wounded and the people of the town (farmers fields for miles around had been destroyed by two armies on the march and the three-day battle). Someone from one of those organizations hands Will an orange, and he’s so hungry that he eats it skin and all.  I based that on a true account.
In ode to Maebelle, the main character in my new book Truth with a Capital T, who keeps a book of little known facts about just about everything, please share a wacky piece of trivia that has stuck with you or please share a little known fact about YOU.
I just finished writing a nonfiction book called I Grew Up to be President, which will be published by Scholastic in December 2011, so I’m full of presidential facts.  Here’s one of my favorites. Woodrow Wilson had a mechanical horse in the White House that he rode for exercise.  The funny thing is that he would dress up like a cowboy before he climbed into the saddle—except for the days he rode it in his underwear!
Thanks Laurie for being here and I knew I could count on you for one of the best little-known-facts I ever heard!
Posted by Bethany Hegedus at 6:26 AM

Email ThisBlogThis!Share to TwitterShare to FacebookShare to Pinterest
Labels: Boys at war, Daniel at the Seige of Boston, Josanne LaValley, Kekla Magoon, Laurie Calkhoven, Will at the Battle of Gerrysburg