So, it’s the New Year. 2011. Most of us have made new goals, new things to accomplish, accessed new hopes for ourselves. One of my hopes when I attended Vermont College of the Fine Arts was to learn structure—and learn I did. (Though there is always more to learn.) Now here at the beginning of the New Year our Monday discussions on craft are going to become a little more formal for the month of January as each week I share sections of my critical thesis, titled, “Character Desire and Plot.”
Today we have the intro where I talk about where I aim to go and what I set out to examine. The books I have chosen are mentioned. Perhaps you want to go pick them off your shelves or go out and purchase copies. The books I take a deep look at are: The Painters of Lexiville by Sharon Darrow, Because of Winn-Dixie by Kate DiCamillo, and When Zachary Beaver Came to Town by Kimberly Willis Holt. 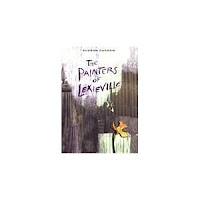 I hope for those of you making learning more about novel structure this year—good reading. And good writing.
Off we go…into Character Desire and Plot.

It is common to classify fiction into genre (fantasy, realistic, magical realism), form (short story, novella, novel), and/or by audience, (children, teen/tween, and adult). Likewise, authors are also given labels, which may lead to being regarded solely as a character-driven or a plot-driven writer. Is there a category that combines the elements of both?  Not according to Andrea Weiss, once senior editor of Pleasant Company whose opinion is cited in the article, “Keep it Moving: Pacing a Novel,” by Darcy Pattison. Weiss defines the action-oriented novel as one in which “(t)he protagonists actions are driving the plot, and her own growth and change are a result of those actions and their consequences” (Pattison 1).  She describes the character-oriented novel as one where:
a character changes or grows in response to the events that are happening to or
around her, and the emphasis is on what the character is experiencing
emotionally rather than on the action itself. Character development rather than
plot is moving us through the story (Pattison 1-2).
Inherent in these classifications is the commonly held, but unstated, belief that
character-driven novels are more sophisticated than action/plot-driven novels. The case is rarely made that an action/plot-driven book is more advantageous, more “literary,” than a character-driven book. Reader and writer preferences aside, this suggests that character and plot are in opposition to one another. Is this a correct assumption? Does the author who taps into a character’s deep-seated desires negate the building blocks of story? How does an author shape plot and develop character? Could a combination of both factors—character and plot— be present in each novel category Weiss defines?
Pattison cites an additional editor opinion in contrast to Weiss’s who believes it is essential for a novel to have both a strong character and a strong plot. Caitlyn Dlouhy, senior editor for Antheneum Books, states, “A reader will follow a great character for a while but eventually something has to happen”(Pattison 2). Pattison does not expand Dlouhy’s thoughts on how plot and character work together to depict well-drawn characters and provide the shape and structure a novel takes in its final form. That is, however, the aim of the discussion to follow: to examine the relationship between character desire and story structure within each of the three classifications: action-oriented (The Painters of Lexieville), character-oriented (Because of Winn-Dixie) and a combination of action-character-oriented (When Zachary Beaver Came to Town). Parallels and/or contrasts in how each author (Darrow, DiCamillo, Holt) depicts character desire and builds story structure simultaneously will be explored.
The Importance of Character Desire
A brief overview of character desire and its importance in structuring a novel is warranted. Han Nolan, in her speech, “Creating Fiction: A Journey to Truth,” at the Rutgers 2003 One-on-One Plus conference states that her quest as a fiction writer is to tell her character’s emotional truths. While writing, she repeatedly asks herself four questions: “Who are my characters? What do they want? What stands in their way? How are they going to get what they want?” (Nolan).  On the surface level these questions point to the issue of how an author goes about discovering what it is the protagonist wants.  However, in asking these very questions Nolan is on a quest to develop the story structure—the journey her character will take to achieve/or fail to achieve throughout the course of the novel.  Robert Olen Butler, quoted in Janet Burroway’s text Writing Fiction: A Guide to Narrative Craft, expands on Nolan’s emotional-truth questions:
Fiction is the art form of human yearning. That is absolutely essential to any
work of narrative fictional art—a character who yearns. And that is not the same
as a character who simply has problems…The yearning is also the thing that
generates what we call plot, because the elements of the plot come from the
thwarted or blocked or challenged attempts to fulfill that yearning. (34)

Butler’s quote links character and plot in a more defined manner than Dlouhy’s earlier attempt. If Butler is to be believed, plot development should begin with a character who yearns, not one who simply has problems. Another author may believe differently—that character is born out of a complex and daunting situation. In fact, novelist John L’Heurreux, quoted by Burroway in Writing Fiction, states, “Story is about a single moment in a character’s life that culminates in a defining choice—after which nothing will be the same again”(35).
At this stage a more concrete definition of plot may be helpful. Burroway defines plot as “a series of events deliberately arranged so as to reveal their dramatic, thematic, and emotional significance” (45). It is worth noting the phrase, “deliberately arranged.”  While Nolan’s drafting technique of asking character discovery questions is instinctual, at some point she must deliberately arrange the story events to build and heighten their impact on one another.

These four elements combined:  Nolan’s questioning method, Butler’s ideas on character yearning, L’Heurreux’s thoughts on how a dramatic situation leads to an ultimate character choice, and Burroway’s definition of plot, are embodied in the motto Katherine Patterson outlines in her collection of speeches and essays The Invisible Child: On Reading and Writing Books for Children. As a new writer attempting to teach herself the fine art of fiction writing, Patterson penned for herself this reminder: “Something’s got to happen. Someone’s got to change” (114). This slogan served as a constant reminder for Patterson to keep an eye on both plot and character— regardless of which made its way to the drafting page first— in her attempts to tell a satisfying story.  How then does a novelist heed Patterson’s expert advice? And is it advice to heed in all three classifications: action-oriented, character-oriented, or a combination thereof?
Ah, come back next Monday and find out! As we tackle the action-oriented novel.
Posted by Bethany Hegedus at 6:49 AM