Inside the Writer's Studio with Varsha Bajaj 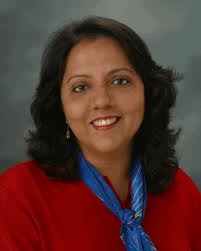 Today for Inside the Writer’s Studio we have an author whose friendship I found in the oddest place: the ladies room at the Austin 2010 SCBWI Conference. Varsha Bajaj and I were on an Austin list serve together where I had been sharing about revising a picture book manuscript that I had co-written with Arun Gandhi (the forthcoming Grandfather Gandhi, with Atheneum) but Varsha lives in Houston and we had never met in person. “Bethany?” she said, upon me wandering in. “Tell me more about the Gandhi book.” Varsha then smiled, and the bad fluorescent bathroom lighting disappeared and I stood basking in the grace of this gorgeous woman. I told her a bit of how the Gandhi book came to be and then she shared about the book, T for Taj Mahal, that she is here sharing about today.
A bit more about the book, from the publisher:
From the quiet grandeur of the Himalaya Mountains to the urban city of Calcutta, T is for Taj Mahal: An India Alphabet showcases India’s exotic treasures.
Visit the haunting Taj Mahal, a tribute from an emperor to his dead wife. Traverse the bustling streets of Mumbai, the second most populated city in the world. Sample a traditional meal fragrant with garam masala spices, or attend a cricket match where some games have lasted up to five days!
Welcome,  Varsha.  Now on to the interview… 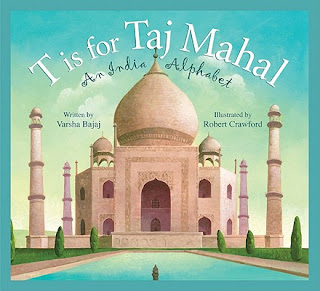 Is there a story behind the story that you wish to share?
I met Amy Lennex (editor, Sleeping Bear Press) at the Houston SCBWI Editor’s Day in 2009. We shared a table at a Mexican restaurant at the end of the day. I had never considered writing nonfiction and hadn’t researched Sleeping Bear Press or Amy Lennex. Ignorant me! The conversation meandered to the bombings at the Taj Mahal hotel in Mumbai over Thanksgiving 2008 and how shaken I was by them, having grown up in Mumbai. We said our goodbyes that evening and I didn’t imagine our paths crossing again. A few months later Amy called and asked if I would be interested in doing an alphabet book on India. Would I like to submit three sample letters? I said Yes!
Is there a favorite quote you turn to when the rejection blues get to you?
I have collected quotes to help me get through disappointment. I also remind myself that even Dr. Seuss was rejected many times so how can little old me expect any different.
Inspired by the Actor’s Studio, what sound do you love? What sound do you hate?
I love the sound of a sitar being tuned. I hate the sound of a baby crying.
Be Brave. Share a bit from a WIP.
Here is a snippet from my middle grade novel, Truth, Lies and Me.
“I want to sing on Broadway, someday,” I declared to Mom, still on a high, on our return flight to Houston.
“It’s not for us Mona. Did you see how pretty all those actors were?” said Mom.
I knew I was no model but so what?
“I want to sing on Broadway, when I grow up,” I told Dad when I returned to Houston.
“How many Indians did you see on the Broadway stage?” he scoffed running his hand through his sparse comb over, “You would do better going to medical or business school. Your Aunt is foolish to have spent all that money.”
Rahul, my high school junior brother, said, “Seriously?”
Gandhi, yep Mahatma Gandhi, looked down from the wall in the living room and smiled, Find your truth.
In India, Gandhi is affectionately called “Bapu,” or father. To me he was a grandfather.
Dad and Mom were devoted Gandhian groupies and he was part of the family. We were friends, Gandhi and I.
That night I found my place, I found my dream, and no one could discourage me.
In ode to Maebelle, the main character in my new book Truth with a Capital T, who keeps a book of little known facts about just about everything, please share a wacky piece of trivia that has stuck with you or please share a little known fact about YOU.
Little known fact about me: My grandfather was a perfumer, my father and brother are perfumers, and I couldn’t use perfume because of lousy allergies!
Thanks Varsha for dropping by! It’s been a total treat. For more with Varsha, be sure to hop over to Cynsations and see her guest post.
Posted by Bethany Hegedus at 5:52 AM