Inside the Writer's Studio with K.A. Nuzum, Author of The Leanin' Dog 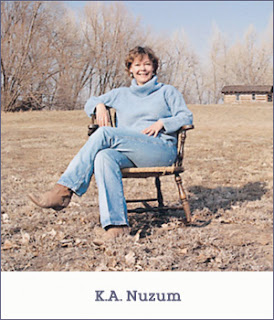 Help me welcome author K.A. Nuzum to Inside the Writer’s Studio. K.A. Nuzum is the author of The Leanin’ Dog which is now out in paperback. I adore this book and wrote a Reading Like a Writer essay on it last year. I’m not the only one who adores The Leanin’ Dog. The book was named an International Reading Association 2009 winner for Intermediate Fiction and a Best Book of the Year by SLJ.


Here is what Booklist has to say:

Eleven-year-old Dessa Dean lives with her father, a hunter and trapper, in a remote wilderness area. So traumatized by witnessing her mother’s death that she cannot bear to leave the cabin even to use the outhouse, she is plagued by nightmares and tormented by waking “daymares.” She lives a lonely life until a lame, half-starved dog comes to the door. In reaching out to befriend the skittish dog, she begins to think beyond her limitations and takes the first step toward healing. In a convincing first-person narrative, Dessa tells of her frustration with her troubles, her hopes when the dog appears, her determination to bring him into her life, and her slow progress toward that end. Though the plot’s outcome is predictable, readers who enjoy animal stories will no doubt find plenty to like here. A quiet novel from the author of A Small White Scar (2006). Grades 4-7. --Carolyn Phelan --

Is there a story behind The Leanin’ Dog that you wish to share? (Ie: the ah-ha or lightning moment where the story inspiration struck) 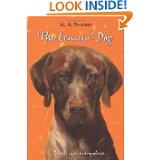 Yep!  I had three big "ah-ha" moments writing The Leanin' Dog.  The novel grew out of a short story I wrote years ago in a bed, huddled under the electric blanket.  I was staying, as I do yearly, in the second floor, unheated bedroom of my rancher friend's 1918 ranch house.  This is where I run away to write.  My faithful chocolate lab, Moot, sat on the floor beside me, leaning against the side of the bed.  Pen in hand, notebook on lap, I stared out the window, waiting for inspiration.

As I watched, it began to snow big fluffy flakes -- slowly at first, but soon, I couldn't see beyond the thick curtain of white.  The mesa, miles to the south, disappeared into the storm, then the juniper and pinon pine trees on the far side of the dirt road that ran past the house.  The road was blotted out next and finally, even the stand of elm trees just beyond the back yard fence disappeared.

I looked down at Mooty.  She looked back at me and smiled, and I thought, "What if a big brown dog like that was out in a snow storm like this?"

That was the first "ah-ha" moment.  The second and third, the deeper, plot-filled and theme-filled ones necessary for the evolution of the story into a full novel, came later.  They came as the answers to the critical questions I had about the story, the explanations for the scene I had set: Why was there a little girl all alone, day after day in a remote mountain cabin?  And, why would a big, brown dog come ascratchin' at that cabin door?

How do you stay inspired to face the dreaded blank page? Is it something you dread? Look forward to? Share a bit about your writing process.

Truthfully, I am horrified by the BLANK PAGE and avoid it like the plague, whenever possible.  I do this by two means.  First, I follow the sage advice that when you stop writing, you don't do it at the end of a section, or the end of a chapter.  You do it in the middle of something, a scene or a piece of dialogue.  That way, you have something to come back to that already has momentum.  The second way I avoid a blank page is getting my speed up coasting downhill.  That is, when I sit down to write, I don't pick up where I left off, but go back five or ten pages in the story and line edit those pages.  That helps me gather the speed I need to zip into a new section "effortlessly", and it gives the additional benefit of constantly tightening and focusing the story.

How does “place” come through in your writing? How important is place in this current novel/picture book? Is it tied to a place you once lived or are familiar with or is it a new world entirely?

Often, "place" functions as a character in my books. A Small White Scar (HarperCollins, 2006), my first novel, is a coming of age story.  THe exterior landscape, the plains and mesa country of southeastern Colorado, acts as one of the antagonists that the main character must confront head-on, struggle with, and triumph over.  And, his physical journey through this harsh country mirrors his emotional/psychological passage from childhood to adulthood.

"Place" is equally important in The Leanin' Dog.  The setting is the western mountains of Colorado in the dead of winter.  The tiny, isolated cabin where the main character, Dessa Dean, lives, is not only her safe haven from the brutal winter blizzards (one of which caused her mother's death), but her prison, as well.  Suffering from agoraphobia after witnessing her mother's demise, she is unable to push herself any further into the world than the front porch of the cabin -- until that big, brown dog enters her life and begins to heal her heart.

The landscape of this story and its weather, are indeed familiar to me, and really, are part and parcel of my own soul. As a native Coloradan I've spent a lot of time exploring and embracing and celebrating our state's myriad landscapes and ecosystems.  Seriously, this state has such variety to its physical features.  I mean, we have the great prairies, real sand dunes, the foothills, and our great 14ers and alpine zones.  We have pronghorn antelope and rattlesnakes, black bears and bald eagles, mountain goats and moose, plus an indigenous, endangered toad. (No, honest the Chamber of Commerce is not giving me a kickback for saying any of this.) Colorado offers so many possibilities for settings, and, because there have been so many different waves of migration from all different directions by all different peoples, it is a virtually bottomless well from which to draw characters.

How do you balance the internal and external arc in the story? Which comes to you first—the external action or what is emotionally at stake? How do you weave the two together? 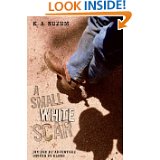 Usually, it is the external action and the characters that come to me first.  That was certainly the case with A Small White Scar (HarperCollins, 2006).  The story evolved from a true life adventure my rancher friend and his best buddy had traveling a hundred miles on horseback to compete in a rodeo when they were fifteen.
And, with The Leanin' Dog, the dog and the little girl and the weather showed up first.  I have found that most of the questions of theme and meaning are present in and waiting to be excavated from, the setting and the physical circumstances of my characters. 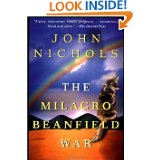 Writers love books; we love reading. What book do you turn to over and over again and why do you love it?
The Milagro Beanfield War by John Nichols (Random House, 1974).  I love everything about this novel: the plot, the true-to-life characters, The New Mexico setting, the themes of loss and friendship and the resilience of the human heart.  It is how organic the book is that makes me love it so (it's the first of a trilogy, but I don't think the other two are as good).  The characters spring from the setting, as does the plot. One of the very hardest things about writing a novel is creating a whole world that makes sense, and Nichols has done this perfectly in The Milagro Beanfield War.

I love, my ears love, my heart loves, the sound of mourning doves calling from the cottonwoods at the back of our property on summer mornings.  I also love the sound of the furnace kicking on and the warm air blowing through the heating vents early, early on winter mornings when I am still in bed.
I hate the sound, from November through February, on Saturday mornings, of geese honking as they fly over the house and the shotgun blasts that come immediately after.

The colt was beautiful; his body was white, but had a sunny cast to it, as though he'd rolled in butter.  His mane and tail were the darkest brown could be without turning to black, and his legs from the knees down, were a lighter shade of brown.  His hooves were gray, and all but the back right set as they should, in a straight line below his fetlocks.  The last, though, was twisted, turned almost ninety degrees from where it should be so that the colt walked with a marked limp, sagging into the right rear leg each time he stepped with it, and moving always slightly sideways instead of straight forward.  It was unusual for a horse to have golden eyes, but this colt did.  They were flecked with black, and they were lit from the inside by a gentle and calm spirit...and by high curiosity.

The von Trapp farm in Stowe, Vermont was originally owned by my great grandparents, Presson and Elvira Gale.

Thanks, K.A. for being here today. Go pick up a Leanin’ Dog or two and share the new paperback edition with a child in your life.
Posted by Bethany Hegedus at 7:23 AM