I am bleary-eyed and sipping coffee at Dominican Joe’s and waiting to pick up my friend, K. A. Nuzum, for one last lunch, before my SCBWI Austin Conference festivities officially end.  What a weekend. Debbie Gonzales, Carmen Oliver, Mark Mitchell and so many others organized a heck (*wink to Elizabeth Law) of a conference.

This year’s conference was held on the St. Edward’s campus at the Ragsdale Center. We were welcomed by the St. Edward’s President, who revealed, in the future the college known for its fabulous liberal arts programs hopes to add a concentration in Writing for Children and Young Adults. How wonderful that would be! And, then came the readings. What a treat! Since graduating VCFA I’ve missed hearing authors read as most book parties only have brief readings when a book release is being celebrated. The lights were turned low and Kimberly Willis Holt was the first to read from The Water Seeker. (And she had an enormously gracious introduction by Liz Garton Scanlon. The intro’s at the conference were works of art in and of themselves.) Kimberly’s red hair obscured some of her face as she read—causing a fan to gush at me in the ladies room on Saturday a.m. “I loved your reading last night.” I told her I loved last night’s reading too but had to disappoint her that I wasn’t Kimberly. Ah, but to be confused even for a moment was a thrill and an even bigger thrill came when I was asked to sign a copy of Between Us Baxters for the Holt family. 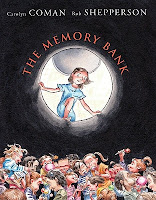 Next up to read was Carolyn Coman who read and showcased the incredible art by Rob Shepperson, the illustrator in her new novel, The Memory Bank, published by another event attendee Arthur A. Levine. I adore Carolyn, her words, her work, and the way both wrap me in a spell I never want to leave. It’s no surprise that after her reading The Memory Bank flew off the BookPeople table upstairs.

After Carolyn, Arthur A. Levine put on his author hat and read from his new picture book Monday is One Day, illustrated by Julian Hector, who was also in attendance and stood at the projector flipping the book’s pages so we could all admire the art. (I was thrilled to learn the book is dedicated to the editor of my forthcoming picture book Grandfather Gandhi, Namrata Tripathi, who Julian told me  Nami discovered him when he was at Parsons.)

The evening ended with wine and cheese and bids at the silent auction. A group of VCFA folks and friends headed down to Pollvo’s and ate to our bellies were full.

***
The full festivities began on Saturday a.m.  I had six ten-minute critique sessions with writers from Austin and other parts. For a number of my critique-es this was their first conference. I admire their bravery in showing their work, taking in the feedback and remember sitting on their side of the table receiving feedback in a semi-public  situation. Kudos to them and I wish them all luck on their writerly journey.

After the whirlwind sessions (speed-editing, anyone?) I was able to join most of the events in Jones Hall. I got to see David Diaz paint on the spot as Carmen Oliver read a bit from a picture book WIP. David answered questions and kept inspiration high.

Elizabeth Law, Publisher of Egmont Books, U.S.A. was given a fabulous intro by talented Austinite P. J. Hoover. Elizabeth never fails to inform her audiences and also entertain them. She is spontaneous, hysterically funny and cares about books, authors, and our industry even over her other passions Farmville and Twilight.

At lunch everyone mingled and strangely enough I found myself back to back with my editor Michelle Poploff (the editor behind this year’s Newbery winning book, Moon Over Manifest.), which is how we ended up meeting for the very first time at an SCBWI NJ Conference held at Princeton. We chatted over our shoulders and I revealed that later in the day at the panel I was to moderate with she and stellar agent, Emily van Beek of Folio Lit., I was going to ask both a little-known-fact about themselves in ode to my last question on my weekly Inside the Writer’s Studio interviews. (Plus, Michelle is directly responsible as she pushed me to find an emotionally resonant little-known-fact to open each chapter of Truth with a Capital T.)

Later that day, it was panel time. I titled my talk with Emily and Michelle “The Ins and Outs of Acquisitions” and much information not usually covered was discussed: the pros and cons of editorial agents, what may be a deciding factor when more than one offer comes in on a project, how acquisitions works at Delacorte,  and some other juicy tidbits that you had to be in the room to hear.

The last session of the day assembled all of the visiting agents and editors for a big, informative, and funny (how can it not be with Elizabeth Law and Arthur A. Levine on the panel. Let’s just say, the sexiness of sea mollusks were spoken of as the next big trend.) panel moderated by Julie Lake with individual and stellar introductions given by Carmen Oliver.

The day ended with a slide show of the roaming photographer’s pictures capturing the spirit and energy of the conference. More wine, cheese, and book talk occurred. I spoke briefly with Arthur A. Levine about my mentor, Norma Fox Mazer, who passed away last year. Arthur launched his own imprint with my favorite of Norma’s tough/tender stories, When She Was Good.  Silent auction item winners were announced, illustrator portfolio winners too and one by one everyone trickled out of the Mabee Ballroom.

Debbie Gonzales organized an after conference party at the Wyndham for the conference faculty, area authors, and other book professionals. The Delacorte Dames and Dude gathered ye round Delacort editor Michelle Poploff for a group picture. Some funny. Some serious. Some with our own version of jazz hands. And, again, as the night wound down and after the quesadilla bar shut down, we made our way back to our homes and hotel rooms, tired, content, and ready to write again.


And for some other Awesome Austin Conference Write-Ups visit:

Posted by Bethany Hegedus at 9:47 AM