Reading Like a Writer, The Heart of Sundee T. Frazier

Yep, it is the third Monday here in Black History month and I have been featuring some of my favorite middle grade novels from the last year or so. We looked at the Wisdom of Kekla Magoon, the Bravery of Rita Williams-Garcia, and now today we're exploring the Heart of Sundee T. Frazier, with her latest novel, The Other Half of My Heart. 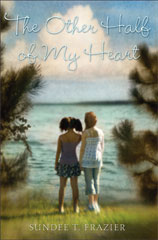 Sundee is a friend and a critique partner. We share the same editor and same agent so we often trade work when it is close to sharing with either Michelle (editor) or Regina (agent). I had the good fortune of reading about Minni and Kiera long before other readers would. I got to see how the way not only the mind and intellect of Sundee works but also the heart. Sundee is not a sloppy writer, she chooses her words with precision. And she slices into the heart the same way, with the skill of a surgeon.  Look at this scene:

Mama put her drink on the counter and grasped the phone with her hand again. She stood silently, looking out the window over the sink. When she turned, the skin between her eyebrows was wrinkled. She pinched the bridge of her flat, triangular nose, the way she often did when talking to her mom. "We've already discussed this. I agreed to let them participate when they turn twelve. They just turned eleven." Mama reached for a cookie. Normally, Mama didn't eat junk food, but Grandmother Johnson, a large woman who liked to throw her weight around, often drove her to do things she wouldn’t normally do.

"Black Pearls of America is a fine organization. I was a part of it. Yes, I know the girls stand to gain by participating. But why—"

Keira came running down the hall in her socks and slid into the kitchen. "Is she talking about the pageant?" she asked Minni excitedly. She'd pulled her thick, tight curls into two pompons, like Mickey Mouse ears. Afro puffs, they called them in their house.

Minni shrugged. She hoped not. They'd been hearing about Miss Black Pearl Preteen since they were six. From Grandmother Johnson, of course – not Mama so much, although she had competed in Miss Black Pearl of America as a teenager.

One gets the sense right away with what is at stake. A beauty pageant--and one for young black women. This tugs at the reader as we already know that inside the biracial family Kiera is the twin with darker skin, and Minni is the one who has white-appearing in features. (For a real life family where this is the case, read about the British family here.) These differences in skin tone have never mattered to the girls before, but now, as they are coming of age they will. Yes? To others. But also to themselves.


With humor and compassion, Sundee explores the heart of these two sisters. Booklist even raved:

The book beats with love, sisterhood and explores biracial families with truth and honesty. If you haven't yet read it, do. The other half of your heart won't be sorry you did.
Posted by Bethany Hegedus at 6:12 AM

Email ThisBlogThis!Share to TwitterShare to FacebookShare to Pinterest
Labels: Delacorte Press, Michelle Poploff, Regina Brooks, Sundee T. Frazier, The other half of my heart