Reading Like a Writer: The Bravery of Rita Williams-Garcia

I love One Crazy Summer by Rita Williams-Garcia and am so glad it racked up during awards season. There was no award out there it didn’t get recognized for—except maybe the Edgar, which it is not a fit for. To recap the shiny stickers for One Crazy Summer we have: a National Book Award finalist, a Newbery Honor winner, the Coretta Scott King Award, and the Scott O’Dell Award for historical fiction. Hear, hear! 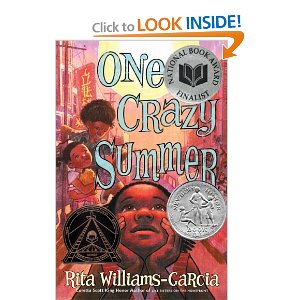 The book is outstanding for so many reasons. So. Many. Reasons. But my applause is for Rita Williams-Garcia's unparalleled bravery.

Delphine and her sisters Vonetta and Fern not only stole our hearts, they captured the spirit and societal changes going on in the late 1960’s at the onset of the Black Power Movement. The very first paragraph grounds us in the era as the three sisters take off on an Oakland, California bound plane with the line, “Those clouds weren’t through with us yet and dealt another Cassius Clay-left-and-a-right jab to the body of our Boeing 727.” Later in the first chapter, Delphine goes on to add:
“Big Ma---that’s Pa’s mother—still says Cassius Clay. Pa says Muhammad Ali or just Ali. I slide back and forth from Cassius Clay to Muhammad Ali. Whatever picture comes to mind. With Cassius you hear the clash of fists, like the plane getting jabbed and punched. With Muhammad Ali you see a might mountain, greater than Everest, and can’t no one knock down a mountain.”  (3)

It isn’t just the references to a famous boxer that set the tone and time. The girls mother—Cecile, the main source of conflict—as the girls try to bond with their mother who left them years ago does much to capture the time and place. Cecile is a poet. She is bound by words, not by family strings. As I read Cecile, who comes across not only as unlikable but obstinate, unloving and un-self sacrificing, I found myself bonding with her. I felt like one of the women from For Colored Girls Who Have Suicide When the Rainbow is Not Enuf by ntozake shange had stepped off of the stage and into Delphine, Vonetta and Fern’s lives. I wanted to hate this woman who wouldn’t call her youngest daughter by her name, who didn’t shield the girls from pain, who didn’t cook for them but I didn’t. The girls can’t either and by the time the book comes to a close there is movement in terms of the mother/daughter conflict that the book grapples with that is at the epicenter of the societal changes and the Black Panther exploration.
Along with Cecile, one multi-layered woman, I adored the no holds barred way Rita Williams-Garcia examines race. As a white reader, I cringed when passersby in the airport stop to give the three “cute colored” girls money and want to take their picture and Delphine comments:
“The lady opened her pocket book, took out a red leather change purse, and scooted coins around, searching for the right amount for adorable, well-behaved colored dolls. Big Ma would have thought that was grand, but Papa wouldn’t have liked it one cent. Now it was time to do what Papa had told me: see after my sisters.
‘We’re not allowed to take money from strangers.’ I said this polite enough to suit Big Ma but strong enough to suit Papa.
The redheaded stewardess was appalled by my uppity behavior. ‘Don’t you know when someone is being nice to you?’
I put on my dumb dodo face to fake not knowing what she meant.
What was the sense of making the stewardess stand guard over us if she refused to protect us from strangers? She thought it was all right to have the large white woman gawk at us, talk to us, and buy our attention. We might as well have stood by ourselves.”  (17)
I not only cringed at the white woman’s demeaning behavior but applauded Delphine’s thoughts and the oh-so-smart way she reacts—by walking the racial line of the times but not giving in to such idiotic behavior. I also applauded the fact that kids—white, black, biracial, Asian, Indian, Native American, etc.—were going to be reading that passage, and the airport scene that comes near the end of the novel.
One Crazy Summer is as vibrant as its cover and as complex as the changing times it depicts and will long be a favorite book of mine, all year round, not just in February.
Posted by Bethany Hegedus at 11:39 AM