Inside the Writer's Studio with Tami Lewis Brown 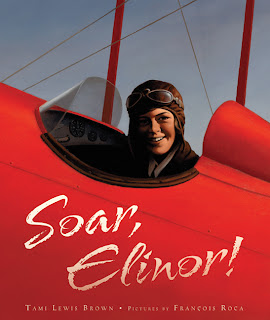 Today we have with us for Inside the Writer's Studio  the talented Tami Lewis Brown whose book Soar, Elinor illustrated by Francois Roca is a book of incredible beauty. Not only is the book smart and crisp and bright in both text and art but Tami is all those things too. A fellow graduate of VCFA Tami now sits on the Board of Trustees. Here are a few stellar reviews for Soar Elinor:


“François Roca's oil paintings capture [Elinor’s] sunny determination as well as the lure of the wide skies and the open cockpit.” —The Washington Post
“Look out, Amelia Earhart. This underdog story features a lesser-known female pilot who gained eminence in the 1920s. At age 16, Elinor Smith became the youngest pilot in the U.S. But when newspapers belittled her accomplishment, she took a dare to fly under one of New York City's bridges–upping the ante by flying under four of them. . . It’s a stirring tale of determination and moxie.” —Publishers Weekly, STARRED review
“Brown’s prose is crystalline, lively and reads well aloud. Roca captures the air and sky beautifully…” —Kirkus Reviews
“This is an excellent introduction to a lesser-known but fascinating adventurer.” —School Library Journal
“Inspiration soars from every page.” —Booklist

On to the interview...
Is there a story behind Soar, Elinor that you wish to share? (Ie: the ah-ha or lightning moment where the story inspiration struck.) 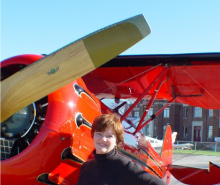 I grew up in a family of pilots- my dad, mom, and even my little sister (who’s now and architect) flew so when I considered writing a picture book aviation was the natural topic. Elinor Smith- a girl who never took no for an answer- had always been an inspiration and I knew her life would make the perfect picture book biography. After all she flew for the first time at age six, begging to ride in a flimsy Farham Pusher Biplane and she began setting world records at age sixteen. I’ve also been a little bit in love with New York, which was the site of Elinor’s most famous flights. All the elements fit together. From start to finish this book seemed meant to be—and that doesn’t usually happen for me!
How important is community in keeping you inspired? What authors are a part of your virtual and/or hometown community? How do they keep you inspired? How do you inspire them?
Community is at the heart of my writing life. I’m a grad of Vermont College’s Writing for Children and Young Adults program and stay very involved with the college as well as with my former classmates. I start every morning with an email with Rose Houghton, one of the members of my graduating class. I have an online critique group made up of former “Vermonters” and we try to get together for annual retreats. Here in Washington DC there are lots of Vermont College alums. My buddies in Through The Tollbooth are all Vermont College grads. Although we write across every genre we share a passion for well told stories.
If you had a writing mentor or teacher, in what way (s) did he or she keep you inspired during your apprenticeship? If you are now a writer-teacher, how do you balance sharing critical comments that will help your students take their work to a new level without plummeting them into the depths of writer despair? (Not that we writers’ are despairing folks.) 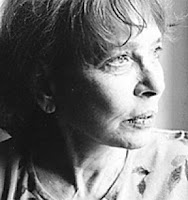 I’ve had so many wonderful writing mentors! It’s impossible to choose just one—but if I have to I’ll say Norma Fox Mazer’s guidance and wise words have the biggest ongoing influence on my writing. Norma preached about the freeing power of structure- how a well built narrative gives the writer the space to tell any story he or she wants to tell. I’m still learning about how plot works- I think I’ll never understand it completely. But Norma is the one who paved the way.
What were some of the challenges you encountered when working on this novel/picture book? How did you overcome those challenges?
Perhaps the toughest part of writing SOAR ELINOR! was choosing which part of Elinor’s amazing life to focus on. Originally the manuscript had three sections- a record breaking altitude attempt where Elinor lost consciousness in thin air and almost crashed, a stunning endurance record where Elinor flew for over 26 hours – even her thermos of hot chocolate had frozen solid by the time she landed, and Elinor’s flight under the four East River Bridges. I took the manuscript to workshop at Vermont College and leaders Leda Schubert and Margaret Bechard encouraged me to focus on the most well known and visually stunning element- the flight under the bridges. They were absolutely right!
How important is voice in your work? How does “voice” come to you?
Voice is the first element of my writing. I can’t get into a story until I hear it with my inner ear. I know this sounds sort of voodoo-ish but that’s the way it works for me. I’ve worked hard to develop my own authorial style, which is a bit different than voice. My writing is spare and direct. I love to read crisp, lyrical writing so naturally that’s my goal for my own writing too.

Writers love books; we love reading. What book do you turn to over and over again and why do you love it?
I love Because of Winn-Dixie by Kate DiCamillo (Candlewick, 2000) The voice is dead on and it has genuine heart from the first paragraph on. Sarah Plain and Tall by Patricia MacLachlan (Harper Collins, 1985) has the cleanest plot structure of any middle grade novel I’ve read. The writing is spare and elegant—it’s a perfect book for a writing student to read again and again. But my all time favorite book is The Underneath by Kathi Appelt (Atheneum, 2008) I first heard Kathi Appelt read a few chapters when it was just the inkling of a manuscript and it was love at first sight (or sound. This is a book that’s even better read aloud.) Every line is a jewel. The Underneath book is what the term “great writing” means.
Inspired by the Actor’s Studio, what sound do you love? What sound do you hate?
I love the sound of clicking computer keys when a manuscript is zipping along. It doesn’t happen often. I usually write at a crawl.
I hate the sound of the garbage truck that picks up from the apartment building across the street- they come at 4 am on Saturdays.  Torture.
In ode to Maebelle, the main character in my new book Truth with a Capital T, who keeps a book of little known facts about just about everything, please share a wacky piece of trivia that has stuck with you or please share a little known fact about YOU.
Here’s a wacky fact from SOAR, ELINOR!- The illustration of Elinor examining the Brooklyn Bridge in preparation for her big flight was inspired by this famous Hollywood image. Gene Kelly, Frank Sinatra and Jules Munshin danced up and down the bridge cables in the 1949 musical On The Town. My editor Melanie Kroupa and I thought it captured Elinor’s quest to inspect every inch of the bridge to make her flight as safe as possible. I found the movie still and we forwarded it to Francois. 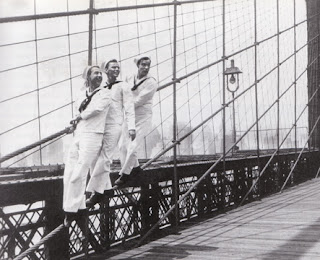 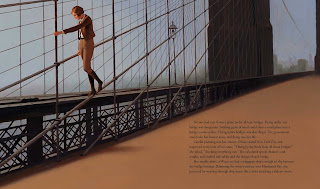 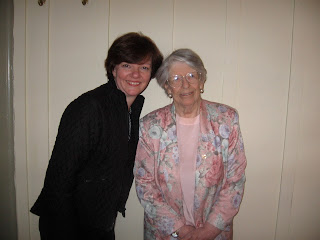 And be sure not to miss the soaring book trailer for Soar, Elinor.


Thanks, Tami for being with us.
Posted by Bethany Hegedus at 6:39 AM