Inside the Writer's Studio with Karen Day

Today for Inside the Writer’s Studio we have Karen Day, author of Tall Tales, No More Cream Puffs, and now the wonderful A Million Miles from Boston. 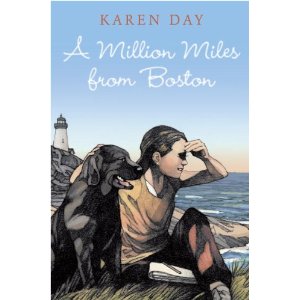 From the Publisher (Wendy Lamb Books)
School's out! That means Lucy is off to her favorite place: Pierson Point, Maine, where she spends summers with her family. And as she tries to forget her worries about starting middle school and about Dad's new girlfriend, Lucy can't get there soon enough. Pierson Point is where she feels most like herself, and where memories of her mother, who died when Lucy was six, are strong and sacred.
But this summer, nothing is the same. Ian, a boy from home in Boston, comes to Pierson Point with his family. Ian is loud, popular, and mean. He and Lucy can't stand each other. To top it off, Dad wants his girlfriend to become a bigger part of Lucy's life.
Karen Day's engaging novel shows that people aren't always what they seem, and that friendship can be found in the most unusual places.
The Reviews are rolling in!

The Bulletin of the Center for Children's Books
"There’s a solid, old-school feel to the story...and a gentleness to the timeless world of summer vacations, where kids pelt around together under minimal adult supervision...A classic summer-growth story."

How do you stay inspired to face the dreaded blank page? Is it something you dread? Look forward to? Share a bit about your writing process.
As a writer, reader and person I am most interested in the inner life of a child. So when I begin a project, I start with a character and something she learns about herself. This often seems to come to me as I’m driving, walking, running. Lucy, in A MILLION MILES FROM BOSTON, came to me one night while I was cooking dinner. I knew that I wanted to write about a girl who had “lost” her mother. So, I wrote about her in my journal, even started a story. But I soon abandoned it. Did the world need another sad story about a girl who loses her mom? But I couldn’t let it go. I kept writing about her in my journal. Eventually I decided that Lucy’s mom died a long time ago and that the “shell” Lucy had built around herself would somehow be challenged. That would be the story. Her dad would be a great guy who was grieving so much when his wife died that he didn’t see how his daughter had “taken care” of herself. 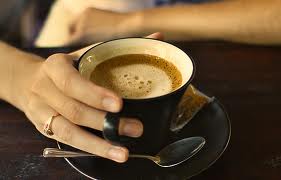 Once I had the psychology down, I was set. But now came the real work. The hard work. Many writers are drawn to what comes easiest, or what interests them most. Sometimes character. Sometimes plot. Plot stumps me. In a middle grade novel I know that I have to do more with my story than simply make it an internal one. So, I do what I’ve done for every novel I’ve written. I’m up at 5:45am, with coffee, at my desk. I don’t allow myself to go online or read back what I’d written the day before. I push forward. Inching the story along every day, sometimes just a paragraph at a time. Sometimes it’s agony. But I write because it’s the only way I know how to deal with these intense emotions that I feel all of the time. So, no matter what I get down it’s always better than not writing at all. Eventually I find a plot. It may take me years. I may have to start down one path and end on another. But I sit there and make myself do it.
If you had a writing mentor or teacher, in what way (s) did he or she keep you inspired during your apprenticeship? If you are now a writer-teacher, how do you balance sharing critical comments that will help your students take their work to a new level without plummeting them into the depths of writer despair? (Not that we writers’ are despairing folks.) 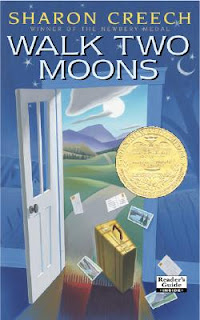 WALK TWO MOONS
ORDINARY PEOPLE (movie)
LARS AND THE REAL GIRL (movie)
RACHEL GETTING MARRIED (movie)
Wow, these are really random things to put together, aren’t they? WALK TWO MOONS is my favorite book, partly because I first read it when I was just starting to write middle grade and it inspired me so much and helped me to see what was possible in this genre. It’s brilliant how Creech weaves sadness and humor. And the dead mom is handled so well. I also have confidence in Creech, that she respects kids, that she knows they can only have just so much in their conscious minds but that they feel and hurt as much as any age group. I strive for all of these aspects in my writing. I think there are several things that link these movies and book. They all have three-dimensional, flawed yet sympathetic characters. They all are about families. And they all involve a death that changes and shapes the characters lives from that point on. This last point fascinates me and I keep returning to it in my fiction. How a trauma has life-long, sometimes generational influence on the people involved. I love creating characters that experience trauma in different ways. It’s challenging but satisfying trying to get this right.
Which character of yours do you hope your readers most relate to? And why? 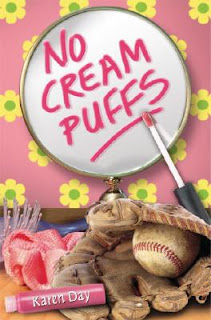 The epiphanies that my main characters make in my first two novels, Meg in TALL TALES and Madison in NO CREAM PUFFS, are pretty unique to them. So I have high hopes for Lucy, the main character in A MILLION MILES FROM BOSTON. Even though she’s coming to terms with her mom’s death – something not all kids can relate to – she has several other, more universal realizations: that people often tell “stories” (to themselves) to make themselves feel better. And that people are often not what they seem. These may seem somewhat insignificant but middle schoolers often see the world in black and white. I think it’s a rare kid who has the innate ability to step back and understand why they and others act the way they do. And so I think most kids will be able to find themselves in this. And there are other characters to relate to: Ian, the boy who bullies and IS bullied by his sister; Lucy who wants everything to stay the same; Bucky who just wants to have fun; Dad who wants everyone to be happy.
Inspired by the Actor’s Studio, what sound do you love? What sound do you hate?
I love so many sounds, it’s hard to pick one. Geese squawking as they fly over a frozen lake. Ice crunching under my boot. Rain on a rooftop. The sound I hate? Easy. Fingernails on a chalkboard. Ouch!
Describe your main characters favorite meal? And why do they love it?
Lucy loves anything that has to do with Maine (because it reminds her of her mom). She, her dad and brother all like to eat at The Clam Shack, a restaurant near their summer home. Fried clams, French fries and soda. The perfect meal!
In ode to Maebelle, the main character in my new book Truth with a Capital T, who keeps a book of little known facts about just about everything, please share a wacky piece of trivia that has stuck with you or please share a little known fact about YOU.
When I was 12 I learned how to whistle, loudly. And now I have a louder whistle than anyone else I’ve ever met.
Posted by Bethany Hegedus at 4:30 AM