May & June: Observations on Art & Fear
Back in the 90’s when I wanted to be an actor I had a stereotype in my head of what an actor should be.  An actor should be thin, wear back, stand tall, be unafraid, be adventurous, be sullen, be the life of the party, be out there—living on the edge. I don’t know why I thought this. Some of my friends, most of my friends were actors, and some of them were all those things but only some. I wasn’t an actor because I didn’t see myself as one. It came down to that…the mystery and the magic of a self-proclamation.
I talk to students from seventeen to seventy who are afraid to call themselves writers. I get it. I understand it. But I do think holding up that banner and announcing to the world: I care about THIS; THIS is who I am is important. Publishers may accept our work or pass on it. I do in my role as editor of the YA and Children’s portion of Hunger Mountain, we may dub or bestow someone with the title “author” but what we can’t do is ever bestow the power of the self-definition of writer on someone. That has to be done long before publication in any form, arts journal, small press, or major publishing house can or will. 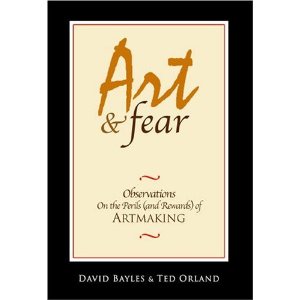 In Art & Fear, Bayles & Orland state: “ The belief that ‘real’ art possesses some indefinable magic ingredient puts pressure on you to prove your work contains the same….” And later when talking about comparing oneself to others, this is stated: “Whatever they (other artists) have is something needed to do their work—it wouldn’t help you in your work even if you had it."
I didn’t need to be tall and thin and wear black and be bold and adventurous to be an actor. Lots of actors aren’t. I also don’t need to be or do anything but be who I am as a writer. All I need to do is do the work, the exhausting but exhilarating work. I need to sit down and write. I need to capture my thoughts, work with them, shape them, and then share them. Share them to small groups first and hopefully with large audiences later. That is all the mystery and magic there is—hard but enjoyable work.
Posted by Bethany Hegedus at 4:30 AM